Translating 'The Sikh Legacy in Pakistan' Documentaries to Punjabi

A project of Sikhlens 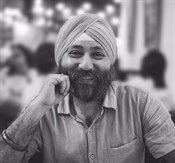 Seven decades after the partition of 1947, the Sikh community remains deprived of the 80% of its glorious heritage which fell in the lands that became Pakistan. For the few visiting these lands, they remain limited to the few functional Gurdwaras. To reconnect the present generation with the forgotten chapters, Amardeep Singh conducted extensive research across 5 states of Pakistan and has already published these in the two path breaking books, 'LOST HERITAGE, The Sikh Legacy in Pakistan' and 'THE QUEST CONTINUES, LOST HERITAGE, The Sikh Legacy in Pakistan'.

Amardeep has also made two widely acclaimed English documentaries, 'PEERING SOUL' and 'PEERING WARRIOR', on the remnants of the forgotten Gurdwaras and Forts of the Sikh era across Pakistan. To increase awareness of the lost chapters of the Sikh history, these two documentaries have already been screened at Film Festivals and public forums across many countries. In March 2020, both the documentaries were publicly released on YouTube. These can be viewed at the links,

There is an increasing demand from the community to make both these documentaries available in Punjabi language so as to educate the larger Punjabi speaking audience. As filming in these remote and restricted areas across Pakistan is challenging and cannot be repeated, hence the Punjabi version will be recreated by using the RAW audio visual content filmed during the making of the two English documentaries.

This funding appeal is to cover the costs associated with making of the Punjabi version of these two documentaries. Cost break-up is listed below.